Karat – The Measurement of Gold Purity

Where does the word karat come from?

The word karat first entered the English language in the mid-15th Century. It derived from the French word carat which in turn came from the Italian carato. The word almost certainly derives from the Arabic qīrāṭ which came from the Greek kerátion meaning Carob seed. In Greek and Roman times it was used as a unit of weight. It was probably not used to measure gold at that time.

So where do we get the number 24 from?

The Roman Emperor Constantine I minted a new gold coin called a solidus to replace the aureus. The plural is solidi and the word soldier derives from it. Roman soldiers were paid in Solidi. This coin was 1/72 of a Roman pound – the libra. It was specifically used as a measurement of gold and was also equal to 24 silver siliqua coins. The word siliqua is derived from siliqua graeca, and refers to the measurement derived from the seed of the carob tree in Grecian times. The Roman siliqua was therefore the equivalent of 24 Greco-Roman carats. From this time on the carat became associated with the number 24. In modern times the carat has been allocated a specific weight of 200 milligrams. We can see that this weight was derived from the original subdivisions of the coins that made up a Roman pound (libra).

“Siliqua vicesima quarta pars solidi est, ab arbore, cuius semen est, vocabulum tenens.”
A siliqua is one-twentyfourth of a solidus and the name is taken from the seed of a tree.

This is the basis of the current metric carat as a unit of weight. It was widely adopted after 1907 when it was defined at the Fourth General Conference on Weights and Measures. We use it today to weigh diamonds and pearls.

How did it Karat become a measurement of the purity of gold?

In 1873 the Germans created a coin called the mark. It weighed 24 carats (4.8 grams). Pure gold is too soft to make a resilient coin or a piece of lasting jewelry. It is therefore strengthened by mixing in other metals – usually copper. The purity of the gold that made up the mark was consequently expressed as the number of karats of gold (purity) that existed in this 24 carat (weight) coin. It is the relationship between the gold present and other metals. In this case the coin was minted at approximately 90% gold.

How does the measurement work?

Basically 18 Karat gold has 18 out of 24 parts gold and the remaining 6 parts made up of other alloys.

Similarly 15 Karat gold would have 15 out of 24 parts pure gold and 9 parts other alloys.

By the mid-16th Century the Karat has been recognized as the standard measurement of gold purity.

Conversion between percentage of pure gold and karats:

How can you measure the purity of Gold?

It is very hard to realistically measure the purity of gold without actually destroying it. This is what is done when assaying it. This involves super heating the gold with a combination of other materials in order to separate out the pure gold. Since this involves temperatures of over 1000 degrees centigrade it destroys any objects that have been created using it. 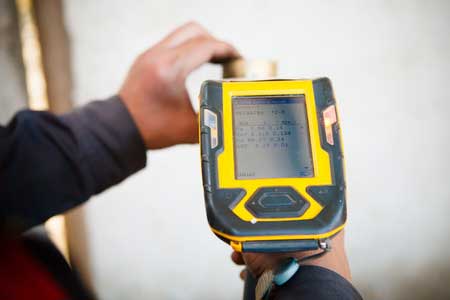 The only other realistic method is the use of X-ray fluorescence (XRF). The contents of material are analyzed by the way the light is reflected off it. However, this system can only evaluate the purity of the outermost surface of the object and not the content inside.

The best way we know to ensure the purity of gold is to purchase from a limited number of trusted dealers. We have, therefore, built up lasting relationships with our suppliers over very many years.

So we must distinguish between carats of weight or mass and karats of purity but they both have their origins in ancient times. They both come from an ancient measuring system based on the carob seed.

Whether it is in our ready to ship jewelry or our custom jewelry here at Regnas we love to use gold.